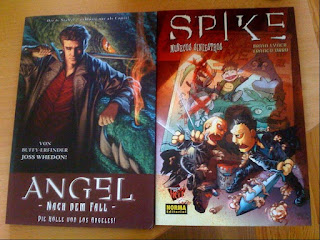 IDW sent over copies of foreign-language SPIKE:SHADOW PUPPETS and ANGEL:AFTER THE FALL volume 1. They went up on my shelf along with the Spanish language SPIKE:ASYLUM. They did a great job with them, and even translated my notes for SPIKE:SHADOW PUPPETS. Though, for all I know they tossed in insults and SPIKE fans in Mexico think I called them dirty names.
Posted by Brian Lynch at 11:20 PM

That copy of Angel: After the Fall in the picture is German, not Spanish.

Oh that's weird. I haven't looked through it yet, didn't even notice. Wow.

Great, but that Angel: ATF is german, although Spike: Shadow puppets is in spanish, "Muñecos Siniestros"; cool. We love your work, Brian.

i love your work in angel and spike

Wow, I would love to have Angel: ATF in German :D
I have Astonishing X-men in German and love it :D

Hi Mr Lynch,
First of all, you're awesome... but i'm sure you already knew that XD.
I wanna tell you a story :P :
As a spanish fan of Angel: After the fall, I've been suffering a cruel torture since this summer, when volume 1 of "Angel: Tras la caída" was published. I cannot understand what's happening, but we've been waiting for "First Night" arc for 7 months!!! It's is too much time that translation should take... :(.
I suppose you can't do anything, but you know... i'm desperate so I must try XD... your job deserves that.
Keep writing, dude! I'm looking forwards Gun's issue, Drusilla's arc... and whatever comes after that.
OOO from Spain
P.D.: Sorry for my bad english :S

Hi Brian! Your works are awesome!
I hope that one day in the future we'll can read "Angel:AFT" here in Italy, too... but I don't knows... this february was out here the 1st (I say... the FIRST!) of the Buffy season 8 comics... so... we have to wait a lot for Angel :(
Sorry for my bad English and kisses from Italy!