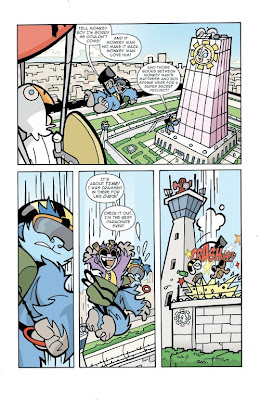 Hope everyone is having a wonderful Thanksgiving. Enjoy some family-time, and some turkey (or tofurkey, if that is your bag).

And hey, ANGEL:AFTER THE FALL # 1 came out a year ago yesterday! So yay for that! It feels odd to be writing my last issue, but I'm also kinda proud. And hey, the new Wizard Magazine (in stores now!) has declared Angel's outing as a human in issue 3 one of the "Best Moments of 2008"! Pretty sweet!
Posted by Brian Lynch at 7:56 AM 2 comments:

Today I started writing something that had THIS at the top of the page:

The first issue of ANGEL:AFTER THE FALL came out a year ago this Wednesday, right? Pretty nuts. I hope you guys dug it so far, and I can promise you, ANGEL:AFTER THE FALL goes out strong. Epic, heartbreaking, I predict tears will be shed while reading each issue. I hope, anyway.

And while we all miss the TV show, you gotta admit, the unlimited budget we have while making the comic allows for awesome panels like this:

That's a quieter moment from ANGEL:AFTER THE FALL # 15. That would be kinda hard to do on a television show's budget, no? I really dig the motion of the tentacles, and the flames on Groo's sword.

TWILIGHT: AFTER THE FALL

I saw TWILIGHT. I enjoyed it on a cheesy level, it was like BUFFY THE VAMPIRE SLAYER without all that annoying quality.
Posted by Brian Lynch at 11:42 AM 11 comments:

With issue 14 of ANGEL:AFTER THE FALL, we bid adieu to the brilliant Stephen Mooney. He did a brilliant job and I am so grateful to him for jumping in and taking over this the comic. Stephen got a TON of scenes that I had been waiting a year to write, so obviously I had them running around my head and a clear vision of how they'd look...

...and his execution of said scenes just blew me away. Better than I ever imagined. He got some of the "money shots" of the series (a full pager that involved Illyria in issue 14 comes to mind) but at the same time, his quiet moments were just as great. He drew a handful of scenes with Gunn that were emotional to look at, before dialog was added.

I'm positive I'll be working with Mr. Mooney again, but as for ANGEL:AFTER THE FALL...

...well, starting next issue, daddy has come home. Franco Urru picks up right where we left off in issue 14. The last three issues of AFTER THE FALL will knock you down sideways (is that a saying? It should be a saying). 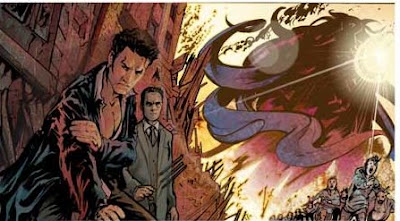 It only gets more epic from there. 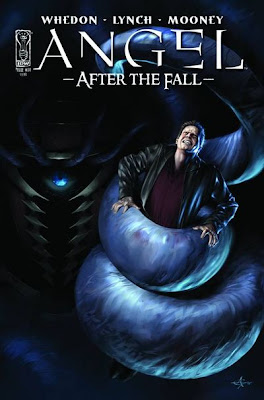 I don't understand it. We started this book a year ago next week, and we're already 14 in? Shouldn't number 12 be coming out next week? What happened? AND 4 issues of SPIKE:AFTER THE FALL? We are TOO good is the problem. Or something.

Anyway, Ifanboy wrote a wonderful review of the first ANGEL:ATF hardcover. Check it out HERE!

Been a busy couple of weeks, but I think I have great, big news coming soon. Not comic related, something else allll together.

Sorry I haven't been blogging lately, truth is, I couldn't remember my password. It was a whole thing. But I missed you. Oh the lonely nights.

If you get a chance, do check out PARTY TRUCK USA. We're up to the fourth episode of the second season, and it's funny stuff. Go to itunes and find us under podcasts.

And hey, if you have xbox360, friend "Betta George" on account of that's me. We can play MORTAL KOMBAT VS DC UNIVERSE or SCENE IT or, my favorite, Uno.

I really hope you enjoy ANGEL:ATF # 14. Homestretch now! There's a scene involving Wesley that I really love. I think you'll know the one I'm talking about.

We made Amazon's Top Ten List of the Year! 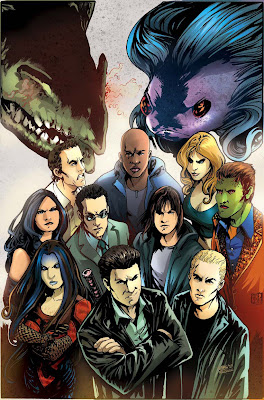 Customer's choice for Grahpic Novels! Number 10, sure, but ANGEL:AFTER THE FALL volume 1 is right there!
I wonder where volume 2 and EVERYBODY'S DEAD fit in. Anyway, thank to all, this is customer's choice, and you're totally the customer, so I am very grateful to you!

But I still hate Cleo,

An Open Letter to Cleo 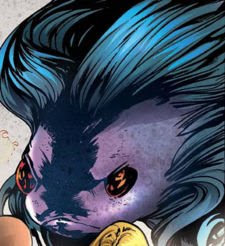 (you don't deserve the "dear" greeting). You are a very pretty betta fish. Your tendrils are long and healthy. Your bowl is a little small but that's not your fault.

So. You are currently on the hit MTV show THE HILLS. Face-time, name recognition and everything. Though, sadly, you are owned by "Lo", easily the worst HILLS character (this is like being the prized pet of Cousin Oliver back in THE BRADY BUNCH days). But, like the size of your pathetic bowl, it's not your fault.

But here's the thing. Before you were introduced on THE HILLS this week, my character, Betta George, was easily the most famous betta fish in the world. He was fictional, sure, but named after (and looking exactly like) my prized, long-gone fish George. George EARNED his fame. He swam and he ate and he wasn't owned by an awful lady (seriously, couldn't you have at least been purchased by Audrina? With her adorable smile, blank dead-eyed stare and non existent personality she's this generation's Andrew Shue).

To sum up: don't get comfortable on your throne as king of all Betta fish. Remember, MTV burns through it's personalities. Do I even have to remind you of Tabitha Soren? Yes, yes I probably do. Which is my point.

PS. You're clearly a boy betta and you're named Cleo. Good luck with the future therapy.
Posted by Brian Lynch at 12:27 PM 7 comments:

I am! You guys should too. Also, if your Halloween costume is still out, dress in that when you go to the polls, just to throw people off.
Posted by Brian Lynch at 7:52 AM 2 comments: