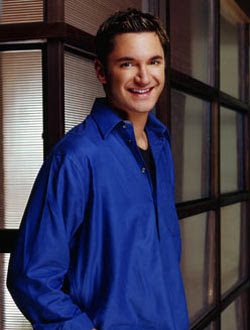 Andy Hallett (Lorne from ANGEL) died today at 33. You can read about it HERE.

I don't have much to say, other than Lorne was one of my favorite characters on any show. He was a part of every Whedonverse series I wrote thus far. I just got new art from ANGEL issue 23 yesterday, and sure enough, there he was. A bust of Lorne sits right above my work space.

Andy brought such humanity to a character that could have easily been a one dimensional part. He was one of the most human characters on the show, even buried in green makeup and prosthetic horns.

And here's Lorne in action, doing what he does best.

I just saw this and it broke my heart. Lorne was my favorite original character in the series and I remember getting so excited by his reveal at the end of Issue 3 (it was 3, right?) of Asylum. Andy always seemed like a cool guy and I really wish I'd've gotten the chance to have met him.

It's gonna be really wierd seeing Lorne in the comic now.

So, so sad. RIP Andy.
You made a real contribution.

I've been posing comments everywhere about this today.

I'll miss you so much Andy. Thank You for giving us the amazing Lorne!

May you Rest in Peace.

This news really bummed me out when I heard it last night. It's very sad, but Hallett brought a lot of happiness to a lot of people, which is a nice legacy.

The world feels less bright without Andy in it. I remember back when Angel was on Season 2, and how I jumped in horror when Lorne's head was delivered to Cordy. In that moment, I realized how much that character (who was not yet a regular) meant to me. I loved Lorne more and more as the series progressed, and I was delighted to see him in Asylum.

Andy, you will be missed. RIP.

Far far from the comics.

Oh my goodness!
No.
I heard it this morning, but can´t believe..
Lorne was my favorite character from Angel and i enjoyed it when he came back in the Season 6 Comics...
It´s so tragical. he was just 33 and this makes me more sad,cause i´m just 2 years older.
Damn!!
You have to know, i´m an Author- i am writing fanfictions bout Buffy, Angel and Supernatural, but from today on it will be very hard for me, writing about Lorne.. I mean Andy is LOrne!!
Hope he will rest in Peace...
A wonderful Actor and Singer is gone.. Another one, gone too fast, it´s a Pity!

Nice job. thanks for sharing. will come back again.