Here's a fun story about the comic book business that someone reminded me of this morning.

One of the "big two" comic companies put feelers out about working with me. They said that they had read some of my stuff and thought I would be perfect for a project. So I talk to them, kinda excited at the idea of playing around in a universe I've read since I was a little kid.

I talk to the editor, and he says after reading my work (they had not just comic stuff, but the Muppet screenplay that I had sold to Henson) they had the PERFECT project for me.

It was lesbian detective series. The word "lesploitation" was used. A lot. "You know, they work hard, they play hard, making out with girls, solving crimes revolving around girls, etc."

I thought they were kidding. They weren't.

I don't know what's more odd: the fact that they were going to try and do a lesploitation series set in regular continuity ("Move it, Spidey...make room, Superman, I can't get a good look at the ladies!") or the fact that after reading a Muppet script I wrote they thought I'd be "perfect" for it.

The series never happened. I think it's for the best.

You can still bid on the signed ANGEL:AFTER THE FALL wedding variant, here, by the way. If you want. Warning: there is no lesploitation. Here's the cover: 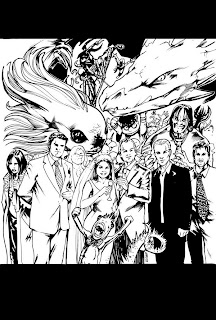 I don't know whether to laugh or be horrified at that story. O__o;;; Now, if someone decided to make a Wolverine/Gambit comic on a regular basis where they solved crime and made out (hopefully with more making out than crime-fighting), I totally buy that. Same goes for Angel/Spike. *hint hint nudge nudge* :D

I can't say that I hate the idea of a project like that, although I think many would write it too "porny".

What more of you have they read? I've read Everbody's Dead & Angel/Spike after the fall, Asylum & Shadow puppets and I've got to say, there wasn't anything specially detectiv-y or lesbian-oriented about them, so I can't see you doing it. But I'm not in the business so maybe that's it.

Or, perhaps they quickly read through Spike Asylum & Shadow puppets, noticed that the the main character dressed in something a male prostitute could wear, fought crime(with a green loud faboulous demon in colorful suits).

Goddammit Brian, I would've bought that...

Haha! That's all I can say really!

Speaking of your Muppet script, BOOM Studios says you'll be writing their new Muppet Show Comic Book after Roger Langridge's run. Any idea when that might come out?