I have a huge list of things that have to be done in ANGEL:AFTER THE FALL # 17. This much to say, so many characters to juggle before I exit stage right, I had to make sure not to leave anything out. I would love to show you the list, but it's all kinda spoilers, so I thought I'd put it up, with key words missing. See if anyone else can decode it!

Also, Chris Ryall was nice enough to send a scan of the page from Wizard Magazine that featured our little book. We had a moment of the year! 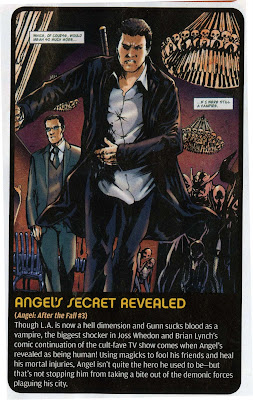 Angel is going to become a vampire again.

2. Angel gives up continuing to be human so that he can either save LA or Connor.

3. Wesley and Fred should get a break in their compleltey f**ked up lives.

3. Angel misses his heart beat, being able to go out into the light and blowing.

4. Angel and Kate talk (with Connor and Spike helping in the background).

5. Illyria says that she wants to destroy Wolfram & Hart's vending machines as it stole her $1.

6. Angel points out that THAT is a great thing, "Being able to see that you ain't screwed up to bad and I see you have a penis."

7. Spike says he's ready to sacrifice everything at a moment's notice.

8. Grusalugg is guarding Lorne and the remaming members of Team Angel in Silverlake

"Angel misses his heart beat, being able to go out into the light and blowing."

This may be my favorite quote ever.

3. Wesley and Illyria get a fly in their ointment.

3. Angel misses long walks on the beach, and leaf blowing.

4. Angel and Squid-lyria talk (with Connor and Spike helping in the background).

6. Angel points out that THAT is a great thing, "Fred ain't dead, see you soon."

7. Lorne says he's ready to sing at a moment's notice.

8. Betta George is guarding a comic shop in Silverlake.

2. Angel gives up shanshu to save everyone!

3. Wesley and fred get a happy ending in their afterlife.

4. Angel and doyle talk (with fred and cordelia helping in the background).

6. Angel points out that THAT is a great thing, "cordelia ain't gonna see you there."

7. Angel says he's ready to die at a moment's notice.

8. Lorne is guarding Doyle in Silverlake.

3.)Angel gives his humanity to Gunn.

3. Wesley and Gunn get a sendoff in their deaths.

4. Angel and Nina talk (with Spike and Connor helping in the background).

5. Spike says This is because Wolfram & Hart's EVIL.

6. Angel points out that THAT is a great thing, "It ain't over see you later."

7. Gunn says he's ready to die at a moment's need.

8. Grusulugg is guarding Lorne in Silverlake.

2. Angel gives his coat to Gunn, seeing as how all cool vampires wear leather.

3. Wesley and Angel get a letter in their mailbox, letting them know they lost their deposit on the W&H building.

4. Angel and Brian talk (with Joss and Chris helping in the background).

6. Angel points out that THAT is a great thing, "It ain't over till its over, see you Rocky."

7. Spike says he's ready to retreat at a moment's notice

2. Angel gives orders to everyone.

3. Wesley and Gunn get a vision in their minds.

4. Angel and Illyria talk (with Betta George and She-skip helping in the background).

6. Angel points out that THAT is a great thing, "Time ain't nothing but time see you in the future."

7. Gru says he's ready to attack at a moment's notice.

8. She-skip is guarding Lorne in Silverlake.