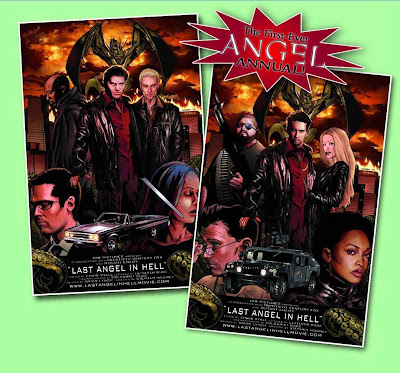 Available for pre-order is LAST ANGEL IN HELL aka ANGEL annual # 1. Please go to your local comic shoppe and pre-order a copy. It's a comic adaptation of a movie that was never made, it's 40+ pages of awesomeness. You will laugh, you will cry, you will believe Nicholas Cage can play Angel. It also has fake ads for movie tie-in cereal, action figures, etc.

When L.A. went to Hell in After the Fall, so did thousands of screenwriters, one of whom wrote a movie based on Angel's experiences there. The first-ever Angel Annual presents an adaptation of Angel's travails, Hollywood-style, in Angel: Last Angel in Hell: The Official Movie Adaptation. Mooney presents two movie poster covers, one featuring the real Angel and company, the other with their Hollywood counterparts.

If Nicolas Cage can play Fu Manchu in Rob Zombie's "Werewolf Women of the S.S." then I totally believe he can play Angel. XD

Wow!!!! It looks awesome! And it's a different edition than "Boys and their toys", isn't it? I have to check out for it in Amazon... :))
And...I have no problem with Nicholas Cage as Angel, but bloody hell why Spike is played by a woman?! What's wrong of Spangel?!!!!??? LOL
Here is my last Spangel video - you can see it in your own risk!!! LOL
http://buffytube.ning.com/video/spangel-body-language-au

Hi Mr. Lynch!
I´m having a really important question and hope you´ll answer me.
I have a Homepage about the Angel Season 6 and Buffy Season 7 Comics (incl. all the other Comics from Bangel and also Fray...)
But now..i totally lost it.
When does Angel Season 6 end??
Is it after the Drusilla Issues or before?
I know there is this "Only Human" series, but this is like "Spike-After the Fall" isn´t it??
It is part from Angel, but it stands alone or not??
I´m totally confused, cause the last month i had no time to follow it.

yeah Only Human is part of Season 6, it spins out from #23 "Become what you are".

and the Drusilla issues happen before the fall and right until the moment the fall happens.

basically this issue is the movie Angel and Spike will go see in "Boys and their Toys" without the banter.

I can't figure out who the actress is that is playing the femal Spike in the movie. Anyone know who she is?

Hello Mr. Lynch,
Here is my trailer "Last Angel In Hell" based on "After The Fall" comic books:
http://www.youtube.com/watch?v=QiSCgRtQi_0
I hope you'll like it. I had got some problems with the upload - U-tube took it down twice from my other account due a copyrighted issues, but I've changed the movie company and everything is all right now ;))You can see the first version with Fox logo on my Buffy-tube page.
And I have no patience to read "Boys and their Toys" I've seen the preview pages and I loved them!!! It looks like a great fun!!!

I was at this website ( http://www.comixology.com/sku/OCT090971/Angel-Annual-Annual-1 )and it says the annual's out January 6, 2010. Is this accurate? Has it been moved from its original December date?

I thought it was so good. I think it was amazing to see.
texas mesothelioma attorneys

I wonder if that is the very same "Angel" I used to watch on FOX... I didn't know there was a comic of it! Though I'm not a big comic freak, I'd like to get it and take a look at it. Nice post.

This is such a nice blog shared here. Great article and thanks for sharing.

I´m having a really important question and hope you´ll answer me.

Thanks for a marvelous posting! I seriously enjoyed reading it, you can be a great author

so this is the Angel card collection, derivaded from the Buffy the vampire slayer, I don't know people give so much important to this character.

I really love this post. Its really a great information in this blog. Keep it up.

I value the knowledge on your web sites. Thanks
Generic Levitra