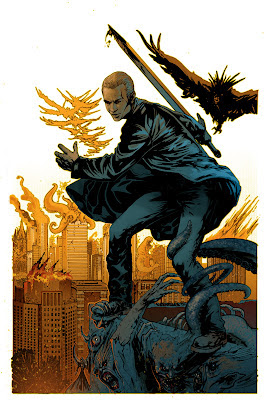 Here are some facts, mixed with some opinions, with a dash of hype and a sprinkling of fanboy excitement.

1. Even though this is my and Franco's third SPIKE series, there are no appearances from Beck or Betta George or Tok or even Trots the Evil Horse Puppet. George premiered in SPIKE:ASYLUM # 2 and then came back to life in SPIKE:SHADOW PUPPETS #2, so it would have been nice to have him appear, however briefly, in SPIKE:ATF # 2, but the story is king and the fish had no place.

I miss Beck and Tok and Mosaic. I think I'll visit them again, AATF.

2. Illyria is a full-on supporting character in this, and we deal with her current situation. However, if you don't SPIKE:ATF you'll still understand what's going on with her in ANGEL:ATF. And vice versa, actually.

3. Illyria isn't the only character from the ANGEL TV show that makes an appearance.

4. I've written two issues thus far (have an outline for the next two) and this ranks with one of the stories in the upcoming ANGEL:AFTER THE FALL # 7 as my favorite Whedonverse writing, hands down. I'm super proud of how it all plays out. I've also seen Franco's art for issue 1, and it is easily my favorite Franco art yet.

A while ago (after the release of ANGEL:AFTER THE FALL # 5 to be exact) a bunch of you posted questions on my myspace blog for me to answer via one of those special "podcasts". Truth is, I did the first half and the file was corrupted. The first half alone was 45 minutes. I was sad and frustrated.

By the way, I'm glad you guys dig the cover posted below. I saw a sneak of Franco's for issue 3 this very morning and it's equally as stunning. I am a lucky lucky boy for so many reasons, but being able to work with Mr. Urru is chief among them.

More later. Back to work for this guy.
Posted by Brian Lynch at 3:05 PM 4 comments:

Let's start this blog off all kinds of correct.

In this ever changing world of cyber-friendship-forging, I never know just where to blog, you know? I could go to myspace or facebook or something called "friend-stur".

Screw those guys, this is my new blog. I do hope you enjoy it. Bookmark it and check back all sorts of regular.

For those that stumbled onto me, my name is Brian Lynch. Hello! I am a writer. Not just blogs, either, seriously, check wikipedia if you don't believe me. I work on ANGEL:AFTER THE FALL, EVERYBODY'S DEAD, and a little something we like to call SPIKE:AFTER THE FALL. Basically, if I'm working on it and it's a comic book, there's a very good chance it will involve vampires and hell.

Speaking of SPIKE, IDW Editor-in-Chief Chris Ryall was nice enough to (A) send me this cover this morning and (B) give me the okay to put it up here for you nice people. So here it is, one of the covers for SPIKE:AFTER THE FALL # 3.

This series is, hands down, my favorite SPIKE series to write. Yet. It's dark and epic and funny and Franco's art is perfect, his best work + my best work = you know, something halfway decent, I think. 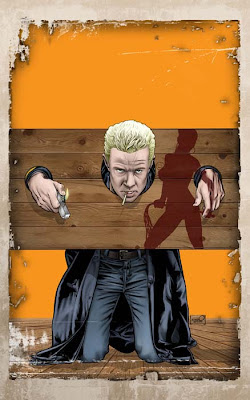 Things do NOT look good for our friend, do they? Thoughts?
Posted by Brian Lynch at 2:09 PM 28 comments:

This is my blog.

I had one on myspace but now everyone's all "myspace is yesterday's news" and I'm like "really?" so I came here. It feels weird but in a good way.
Posted by Brian Lynch at 8:25 PM 6 comments: